In the ring today are two contenders: the hometown favorite, none other than our foldable V-Flat, versus an old fogey, the softbox. Let’s take a look at this friendly showdown between two light modifiers with our ring announcer, photographer Jeff Carpenter (@readylightmedia).

“We’re gonna take a look at the difference between shooting with a softbox and a V-Flat when using them as a key light for portraits,” Jeff said. (The term “key light” just means it’s the main light source for the scene.)

Will there be that much of a difference in the final shot? Is there going to be a definitive winner? Well…let’s think about this. The softbox is an enclosed light source with the light shooting through layers of material. The V-Flat is bouncing the light from the source to the subject. Will the results be distinct? Is one going to be an absolute knockout vs. the other? Let’s continue along with Jeff and see.

With a medium-sized softbox to camera left and model Allee-Sutton standing ready at the cyc wall, Jeff metered the light at 5.6 and took a shot. As usual, he was tethered to his computer for quick and easy review of his images.

“One thing to keep in mind with the softbox is because you do have these edges on it, the light’s gonna fall off a little bit differently than you’ll see with the V-Flat,” Jeff explained. 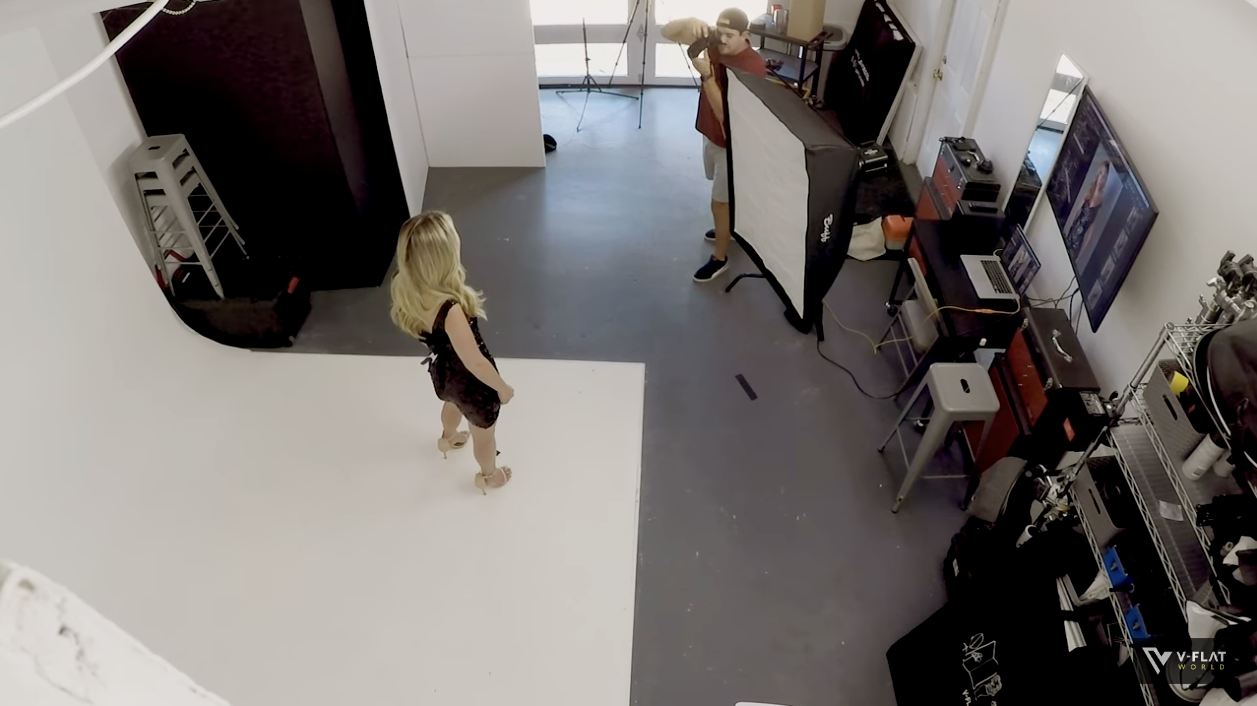 After getting the photo he needed, Jeff took the softbox off the light and flipped the strobe around to shoot into the white side of a foldable V-Flat, bouncing the light.

“One thing that you’re gonna notice between the two shots is…like I said, the fall off between the softbox— because it’s got those edges where…the light’s gonna be a little bit more of a narrow beam compared to the V-Flat. So the background is gonna be a little different. And another really big thing that you’re gonna notice is the color temperature of the two shots.” Jeff said.

He explained that because the strobe light has to go through “a couple layers of diffusion” the color ends up on the warmer end of the spectrum “because that material’s gonna affect the color temperature.” Whereas the V-Flat is taking the light and bouncing it back, which “is gonna be a little more of a cool temperature.”

At 80” x 80”, the V-Flat has more surface area to bounce light as opposed to the medium softbox. A larger surface area means a softer light. Because of this, the V-Flat automatically creates a softer, flatter light with shadows that aren’t as deep. The light won’t be as directional or dramatic as the softbox. 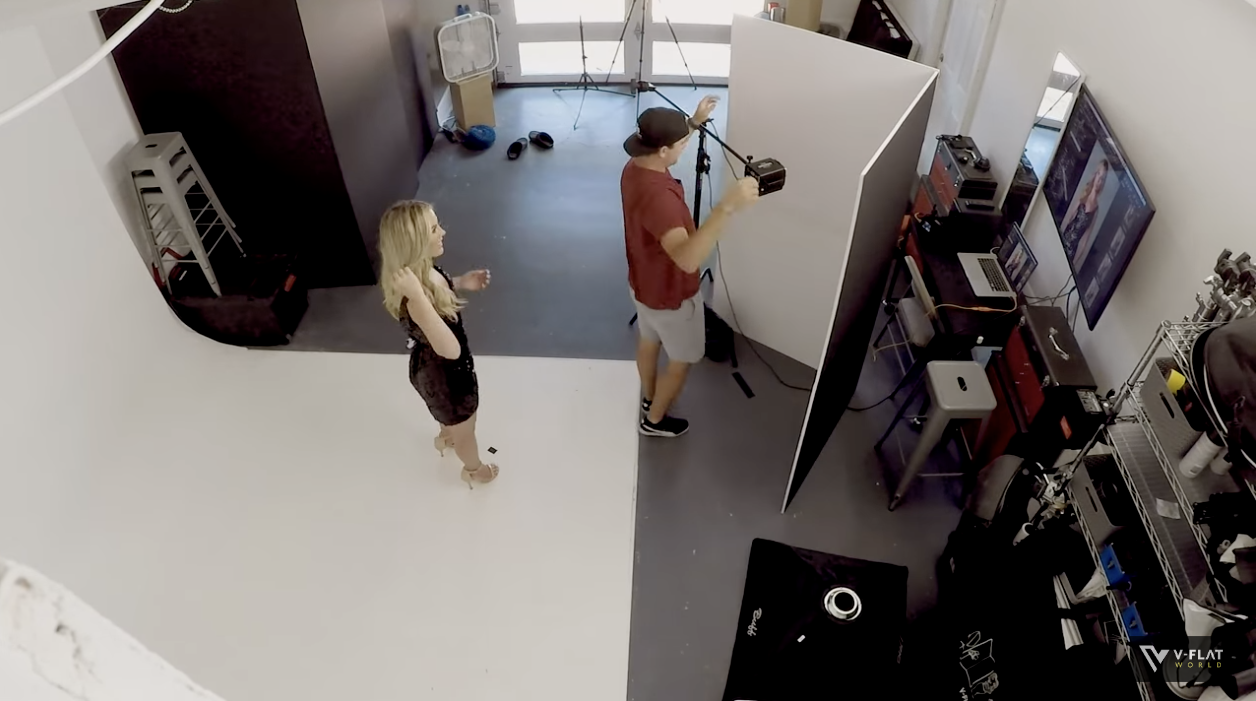 Understanding Color Temperature According to the Kelvin Scale 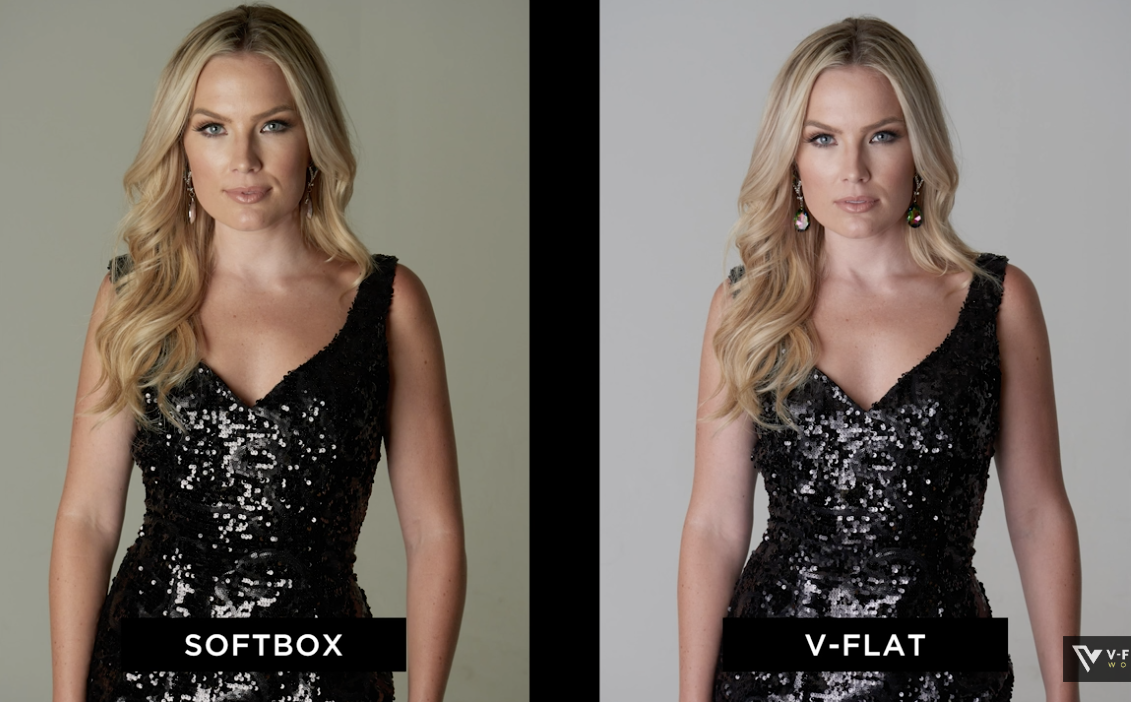 Looking at a side-by-side comparison, the difference in color temperature stands out first and foremost. As stated before, the softbox produces a warmer (yellow-toned) image and the V-Flat produces a cooler (slightly blue-toned) image.

In case you’re not familiar with how color temperature is measured in photography, the Kelvin (K) scale is the standard used to measure color temperature (how warm/yellow or cool/blue the light is). If you’re not well-versed in this, play around with it. Your camera most likely has a white balance option marked with a “K” if it doesn’t say “Kelvin.” Most cameras run a Kelvin scale of about 2000K to 10,000K. Candles are typically around 2000K (very warm, yellow light) while daylight is anywhere between 5000K-6500K (white to blue light).

If you’ve ever bought “daylight balanced” light bulbs at Home Depot, you might’ve noticed a spec listed on the outside of the box that says something like “5000K.” That’s the same thing we’re talking about here. If you want warmer lights inside your home, say, for your bedside lamp, then choose a bulb that has a lower Kelvin number on the outside of the box. You’ll want something with a rating that’s a lot less than a 5000K daylight balanced bulb. The package will typically say something like “2000K” or “2700K.”

Remember that with the softbox the light is coming at the model in a narrower beam than the light bouncing off the V-Flat. When it comes to lighting, the smaller the beam of light compared to the subject, the harder the light. As mentioned before, the V-Flat provides a larger surface area which creates a larger light source, or a larger “beam” of light, so to speak. That’s why the image shot with the V-Flat has softer light. But we’ll get more in depth on that in a moment.

If you look closely at the softbox image on the left, you’ll notice that the shadows alongside her nose and next to the v-neck on her dress are darker and more defined than the image on the right. Her jawline is also more distinct.

Now, let’s study the image on the right, the one lit with the help of a V-Flat. Due to the open nature of the V-Flat, you’ll get more bounce; more light scattering than with the softbox. The bigger the light source in relation to the subject and the more the light bounces around, the more diffuse the light. Notice that the V-Flat image has less contrast and the shadows are lighter with softer edges. The soft light coming off the V-Flat wraps around the model and reaches the background to light it a bit brighter than the softbox image.

So Who Wins? V-Flat or Softbox?

Hmm. It might seem obvious as to who we’d like to declare the winner… but as much as we love our hometown favorite, we might have to call a draw on this one. Both the softbox and the V-Flat have the ability to step into a room (or ring) and light it up in their own unique way. Both are able-bodied key light contenders with different personalities and skill sets. One way isn’t necessarily wrong or better than the other. They’re just…different. And different is okay.

Plus, we aren’t gonna pretend that any differences such as color temperature and contrast can’t be tweaked in post. However, it is good to know your gear and what it can do. That knowledge alone is worth a lot on set as you continue to create as a photographer. You never know what situation you might encounter while shooting. Always keep learning and keep what you know fresh on your mind. Knowledge is power.

We’ll see you next time.

5 Reasons Why You Should Be Using V-Flats (Video)