Well, the video is 4 minutes and 34 seconds. But you’ll get all you need to know about creating vintage portraits in under three.

All around stand-up guy and skilled photographer Manny Ortiz gives us a few laughs and offers a glimpse into the playful relationship he and his wife Diana have. After all, a couple who laughs together stays together.

Inspired by a vintage photograph, Diana came to Manny with the idea of recreating the image with her as the model. (Yep. There are perks to being married to a photog. A really skilled and creative one at that.)

Speaking of skills, Diana has several skills of her own. If you watch and listen closely to the video, you’ll hear Manny say that Diana sourced the wardrobe and props as well as crafting her own makeup and hair. Wow. Girl is the real deal. Full package right there.

“Diana had a great idea for a shoot,” Manny said. “She wanted to do something, you know, vintage. She put together the whole outfit and the props and everything. So it’s my job to put the photo together in terms of lighting, aesthetics, and stuff like that.”

Teamwork, people. Teamwork makes the dream work. And Diana’s dream? To get a sweet vintage photo of herself reminiscent of a Hollywood starlet.

If At First You Don’t Succeed, Try, Try Again

After studying the inspo pic, Manny figured he’d set up a stripbox to the side with a grid “to keep the background as dark as possible.” Then he placed a Mole-Richardson spotlight on a boom behind Diana’s head to mimic the hair light seen on the model in the vintage photograph. To cut out as much ambient light as possible, he closed all the blinds in his studio.

Did it work? Did he nail it on the first try?

“Uh, well, you know. I was dead wrong!” he laughs. “This was the first test shot I took and I instantly knew it needed a lot of work.” Manny’s first test shot of Diana with the original inspo pic on the right.​​

Even the pros don’t succeed on the first try. The trick is to keep going, undaunted, until you figure it out.

“So I made some corrections to the setup. And this is what I came up with,” Manny said.

He used a large Westcott Zeppelin parabolic softbox on camera right because he needed a big, soft light to illuminate Diana from the side. Then he used a V-Flat on camera left, opposite the softbox, to reflect light. “What that’s gonna do is give me a little bit of bounce on this side so it’s not completely dark and really harsh and dramatic.” BTS setup with Manny Ortiz and Diana, diagramming how the light goes from the softbox to the V-Flat for fill light.​​ Manny used a Tiffen Black Pro-Mist ¼ Diffusion filter to “really bloom out the highlights. Kind of a vintage, you know, that old school vibe versus everything being sharp and crisp…more of a dreamy vibe.” 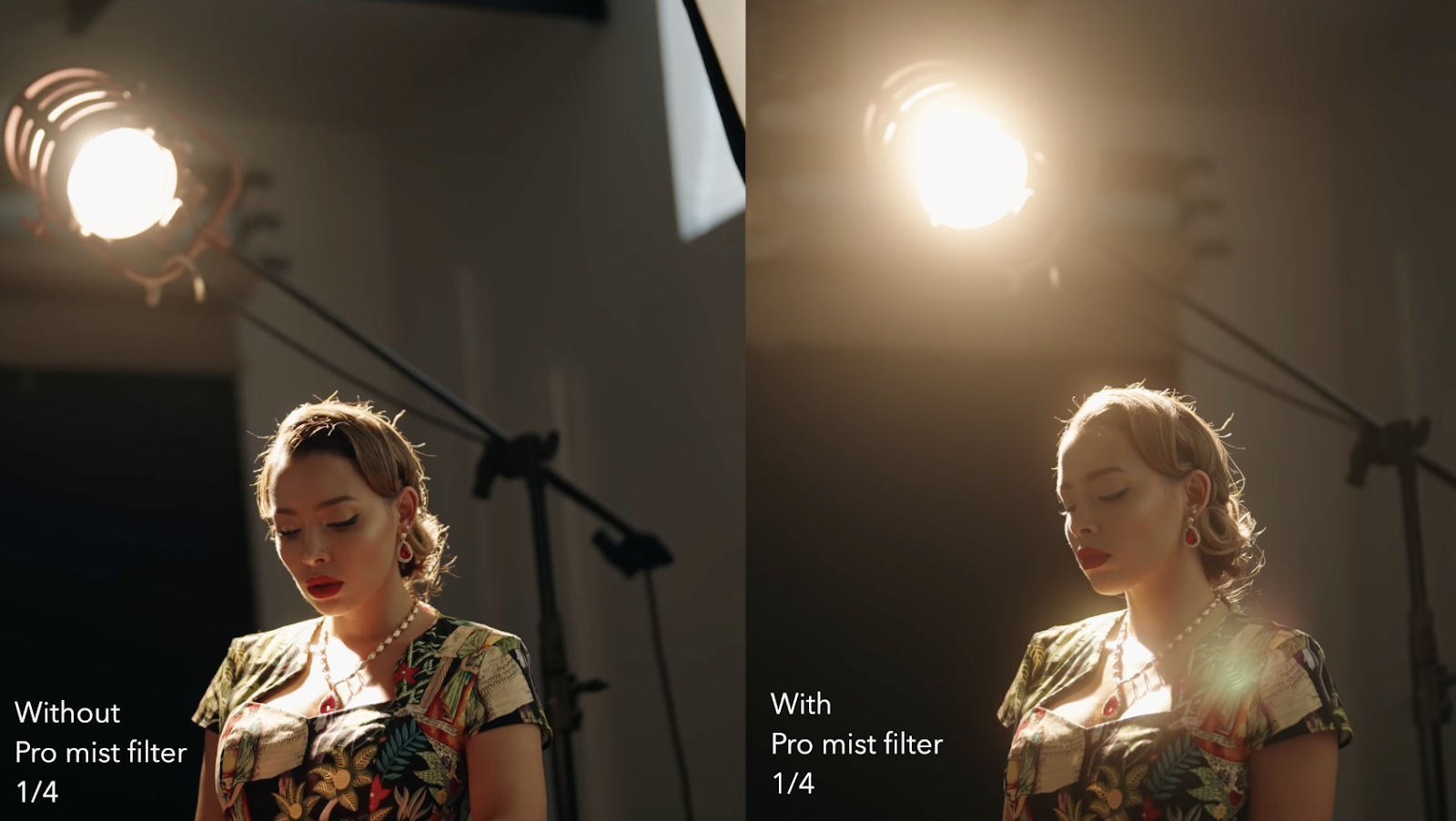 Rather than use cigarette smoke like the original inspo pic, Diana and Manny added a little bit of “smoke” with a fog machine “because I feel like that’s a cool aesthetic,” Manny said. “Adds a little atmosphere.” 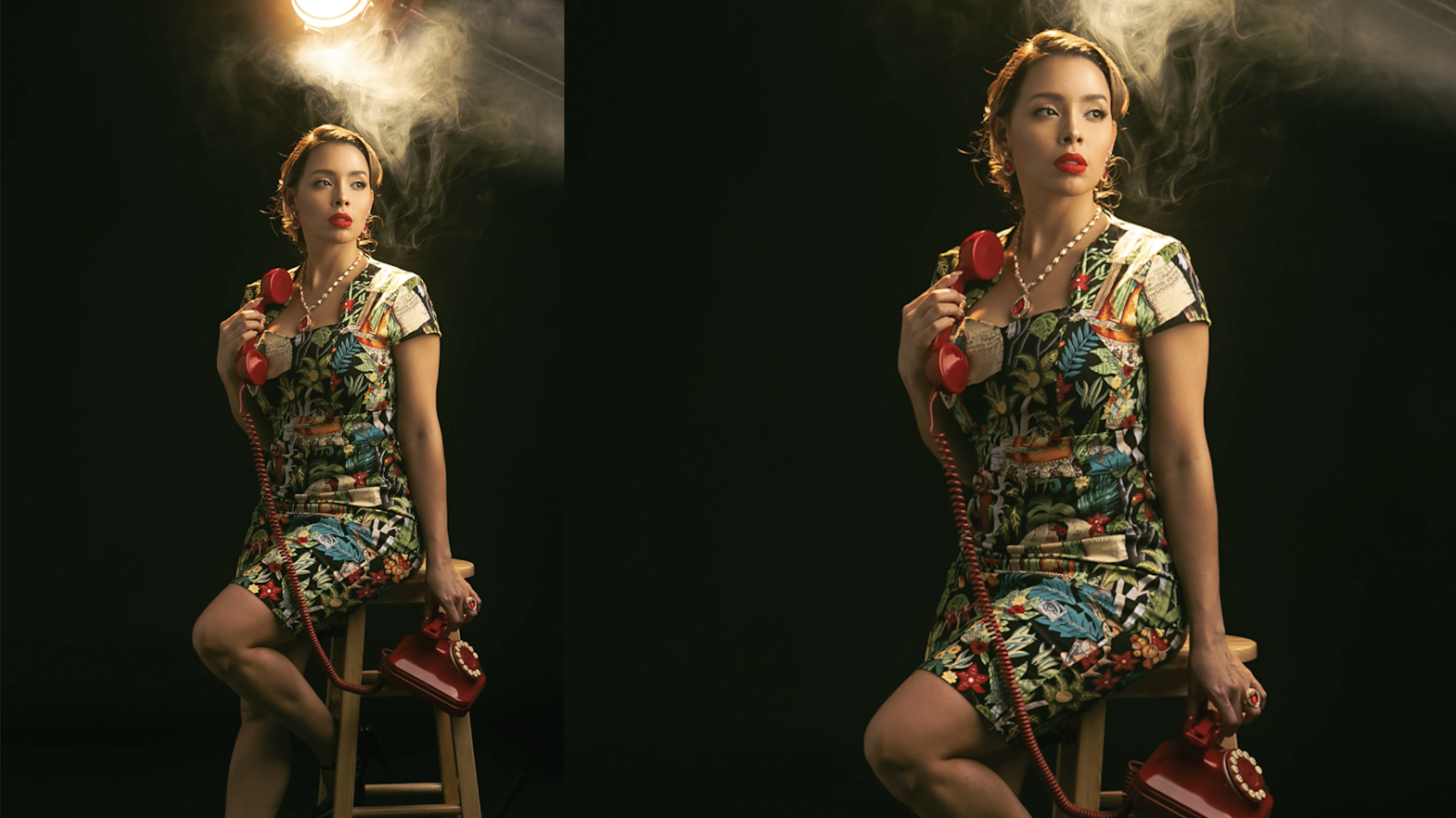 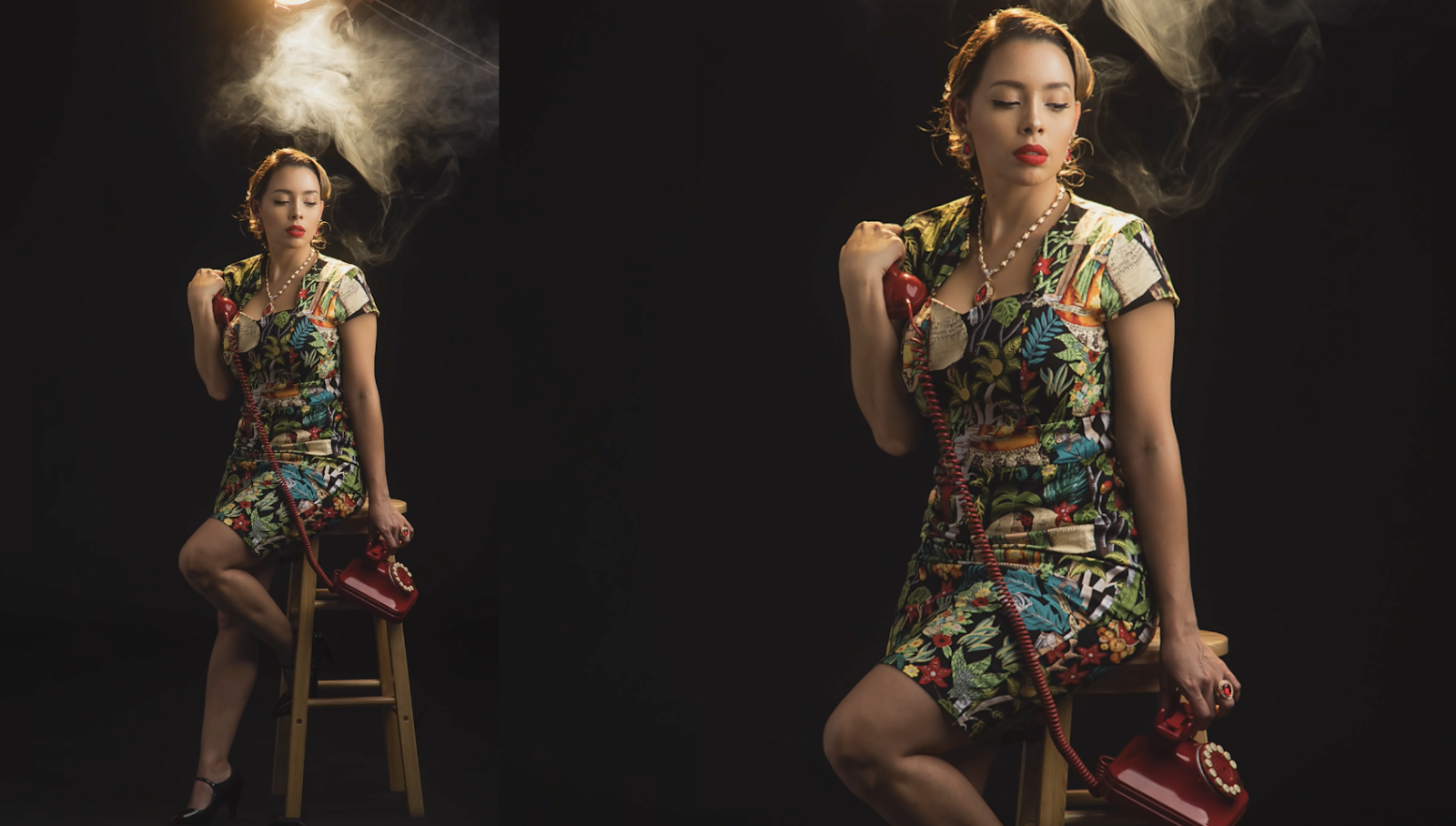 Manny & Diana, thanks for the tutorial. Great video!