If you really want to raise the bar on your images, start experimenting with shadow patterns and light through the use of gobos. Gobo stands for “go between optics” or “goes before optics.” It’s anything placed between the light and the subject in order to create visually interesting shadow patterns. Gobos give you the ability to form really cool lighting designs that take your images from solid to stunning.

Gobos can literally be anything: a piece of cardboard cut to look like a window, lace fabric to add delicate designs across the image, or a fancy metal gobo used inside an optical snoot.

Photographer Hudi Greenberger takes a few minutes to play around with light and shadow as he shows us how to shoot through glassware, liquid, and an optical snoot fitted with a gobo in order to up the ante on our images.

Using a Single Hard Light Source and Glassware as a Gobo

We start with a mouthwatering cheese board placed atop a Duo Board (but of course 😉). Here’s the original image without any gobos, just a single bare bulb spilling across the scene. Definitely a solid image, but let’s see if we can take it up a notch. Here’s Hudi positioning glass bottles while watching the live view on his laptop. The main light is out of frame, to camera right of the glassware. Live view makes it super simple to play around with composition while watching the scene change in real time on a monitor larger than your camera’s screen. Also, since Hudi’s camera is mounted above the scene, it would be completely tedious to climb a step ladder to check the composition in camera each time a change was made to the scene. Employing live view is a much more practical way to shoot and streamlines the entire process.

Here’s the cheeseboard with a few darker, thick-glass bottles, plus one clear glass bottle filled with oil. Notice the quality of the shadows and the way the light filters through the glass as well as the oil. A benefit to gobos are that they hugely boost a scene without requiring any additional props or styling to the main subject.

After trying a few darker, thicker glass bottles, he switched to clear glass stemware placed out of the frame but still in the path of the light. “They’re out of the frame, they’re not in my shot. I just want the shadows coming across,” he explained. “Again, interest. Something different,” Hudi said. “So you can kinda see that it’s a wine glass without it actually being a wine glass [in the image], which is kinda neat.”

Next, he experimented with apple juice inside the stemware, adding another element worth holding our gaze. The juice darkened the shadow within the cup portion of the stemware (as seen immediately below). However, Hudi decided he actually preferred one of the glasses without the apple juice because it created too dark of a shadow for his taste. 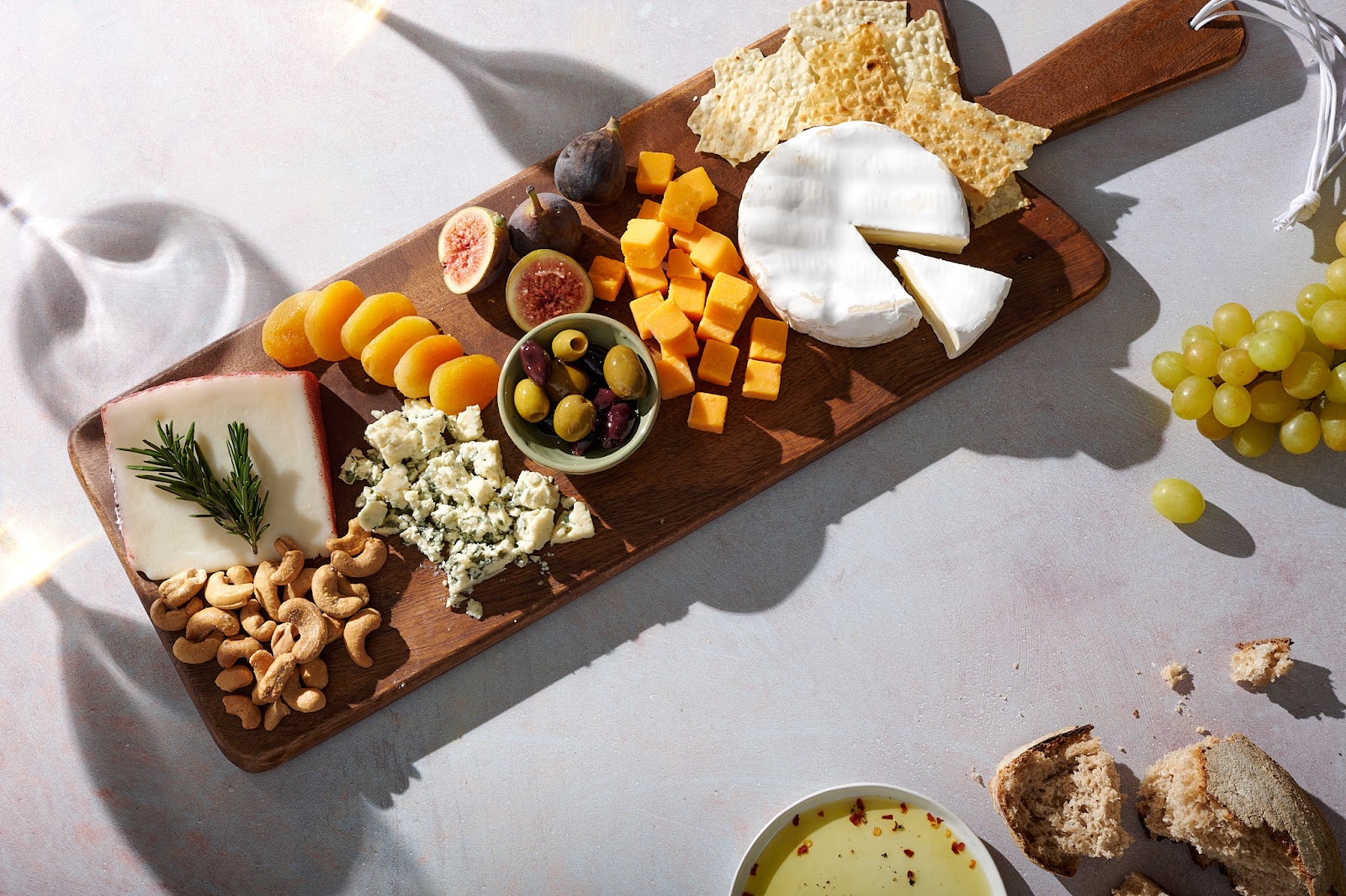 It turned out that the glass looked even better once emptied of the juice. The residue from the apple juice created interesting shadow play. Surprised, Hudi said, “Oh! It’s actually cooler after some of the [juice] is [left] on the glass. You get all this weird reflection stuff going on.”

When experimenting with gobos, feel free to play with all kinds of materials. Try smooth glass, bubble glass, faceted glass, etc, plus semi-transparent fabrics and objects. Window frames are also a popular gobo option. Also experiment with spraying your glassware with water or filling it with liquids and oils. “The next gobo we’re gonna talk about is using these tabletop V-Flats just to create a shadow line across the set. It’s gonna be a hard shadow line because we’re using hard light.” Hudi said.

The tabletop V-Flats act as towering flags on either side of the scene with a bare bulb shooting through the opening between the two V-Flats. This creates a slice of light across the cheeseboard, which can be as narrow and dramatic as you want.

“One really cool thing you could do with this. You can get, like, this little slit of light,” Hudi said, positioning the tabletop V-Flats closer to each other. “I want it right here on this bleu cheese.” 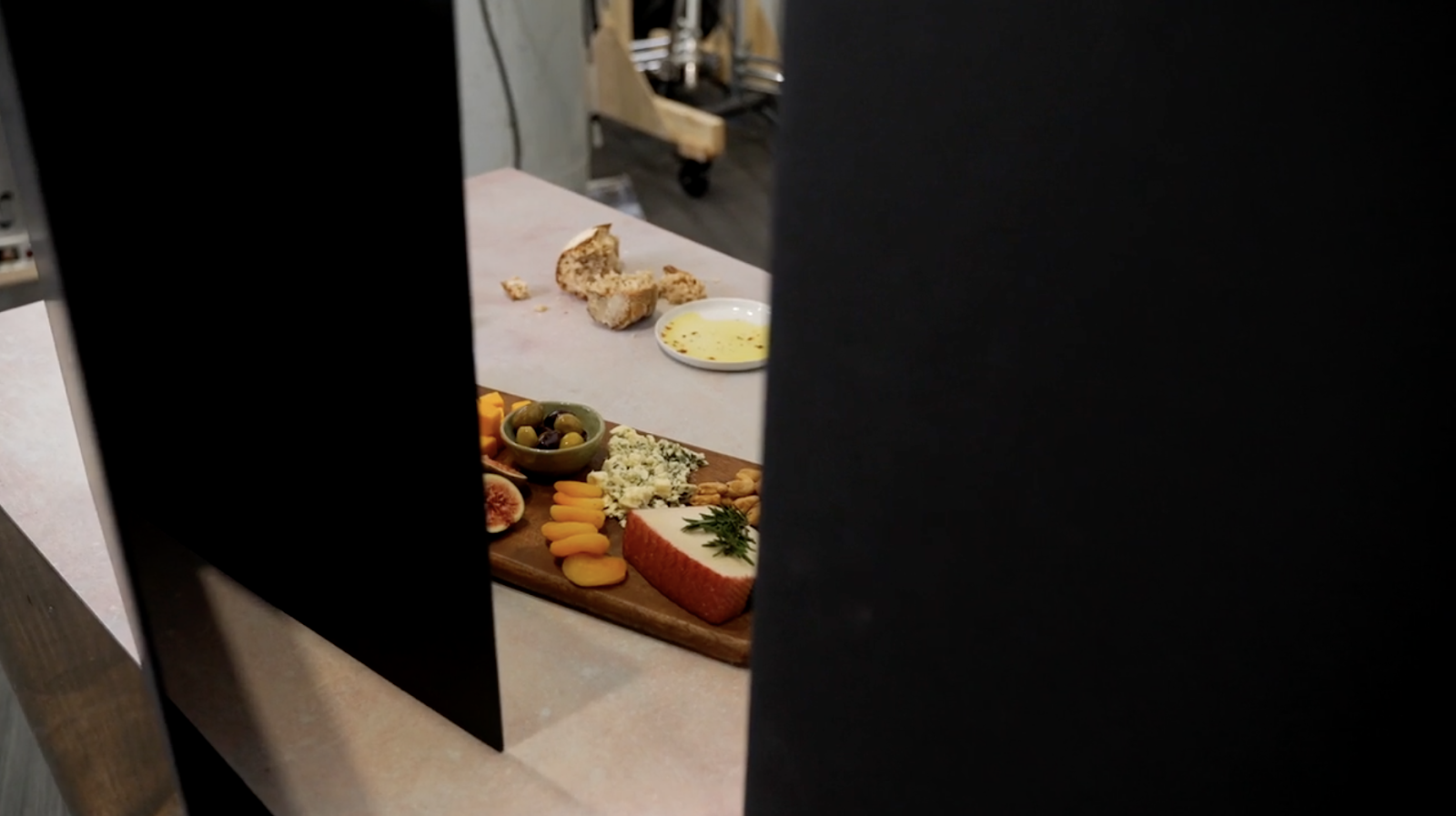 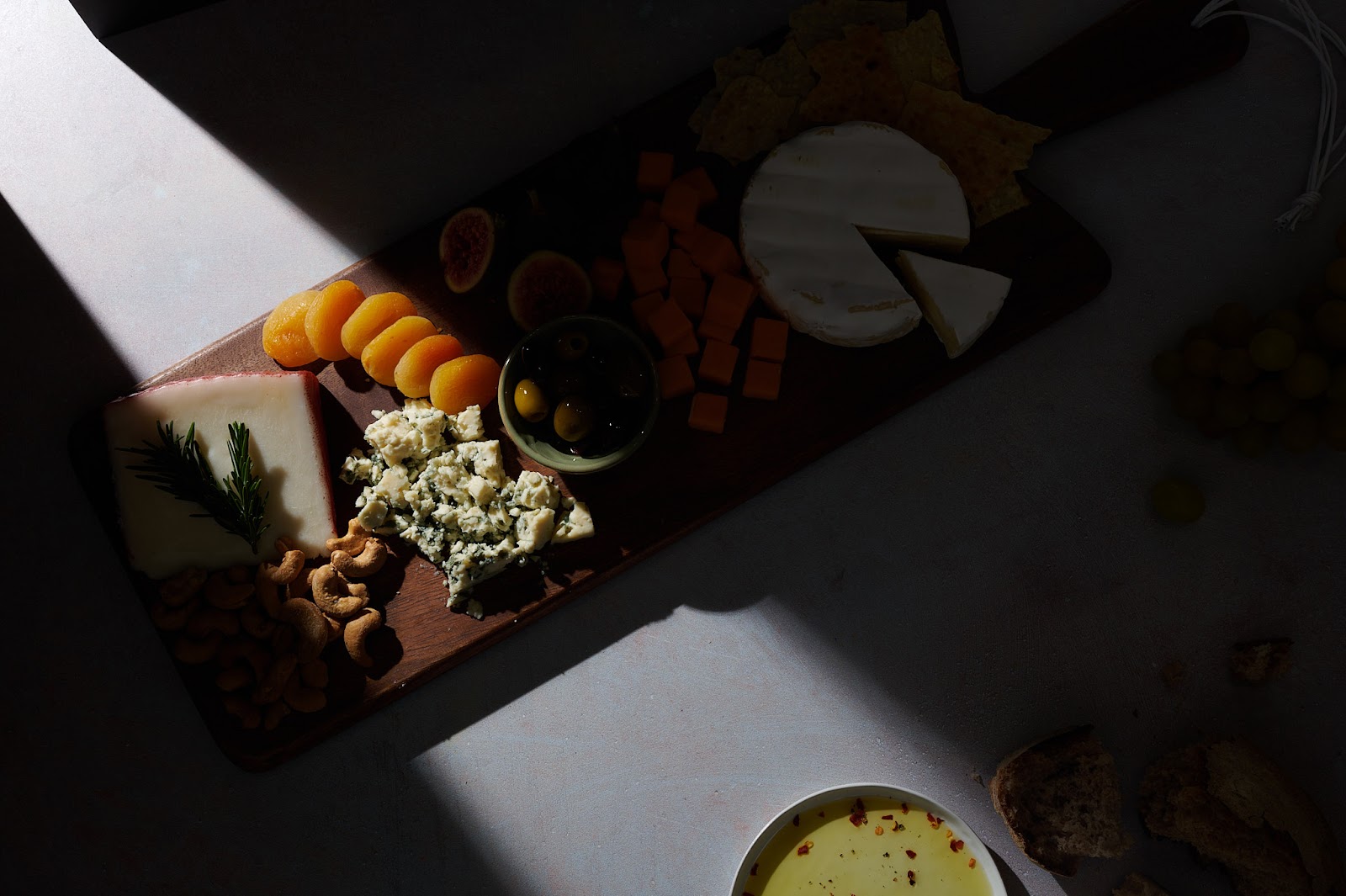 A note on the spread of light from Hudi, “One thing that’s really cool about this setup (with the tabletop V-Flats) is…the closer the light gets to the set, the more angled the shadow goes out. If you look, the lines (from the light) are not perfectly parallel. They’re slightly going on a ‘v’ shape. So if I bring this light closer to the set, it’s gonna be a wider ‘v’.” (As evidenced in the images below.) 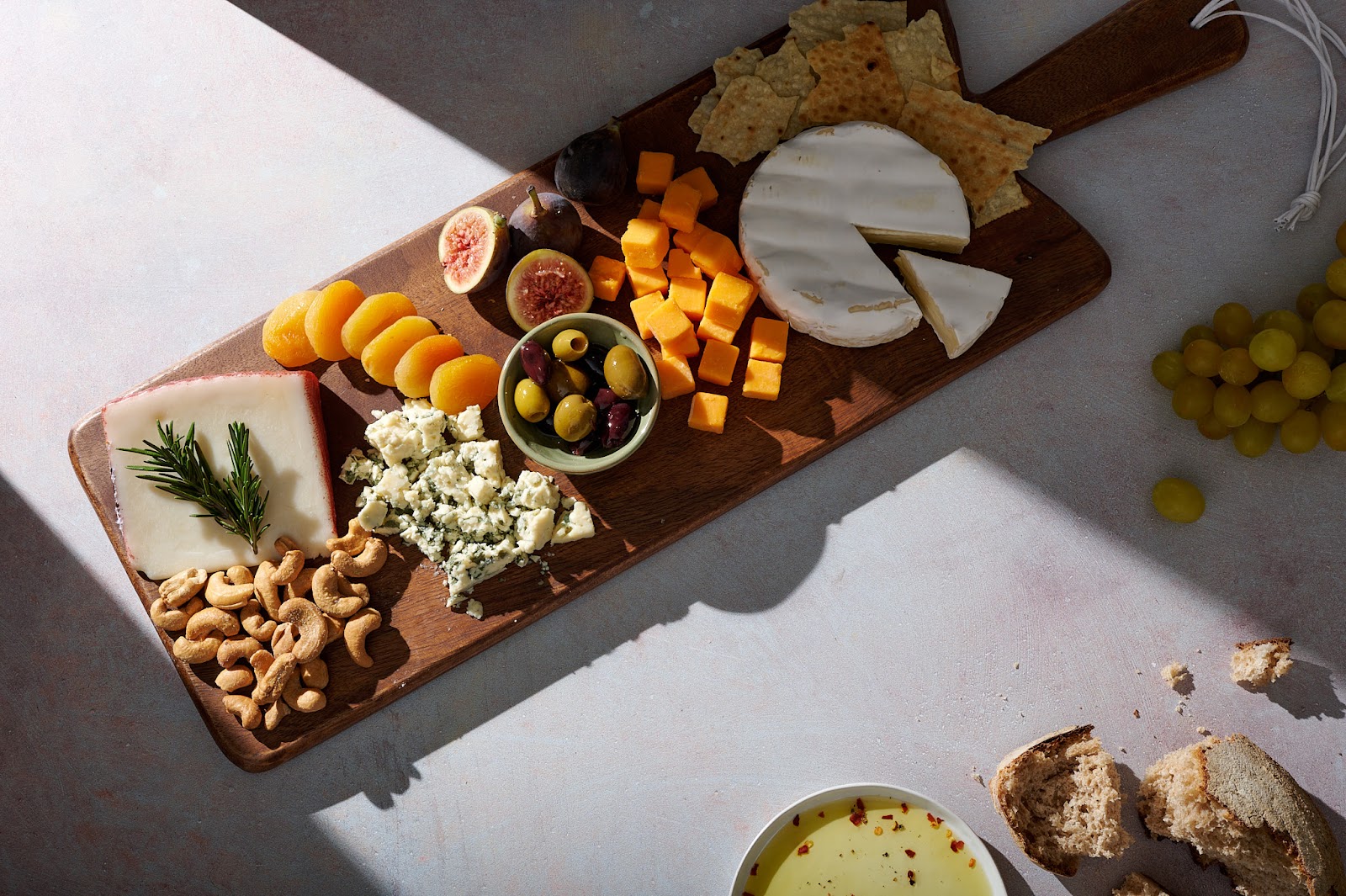 Below: the beam of light gets wider the closer the light moves to the set (in comparison to the image above). 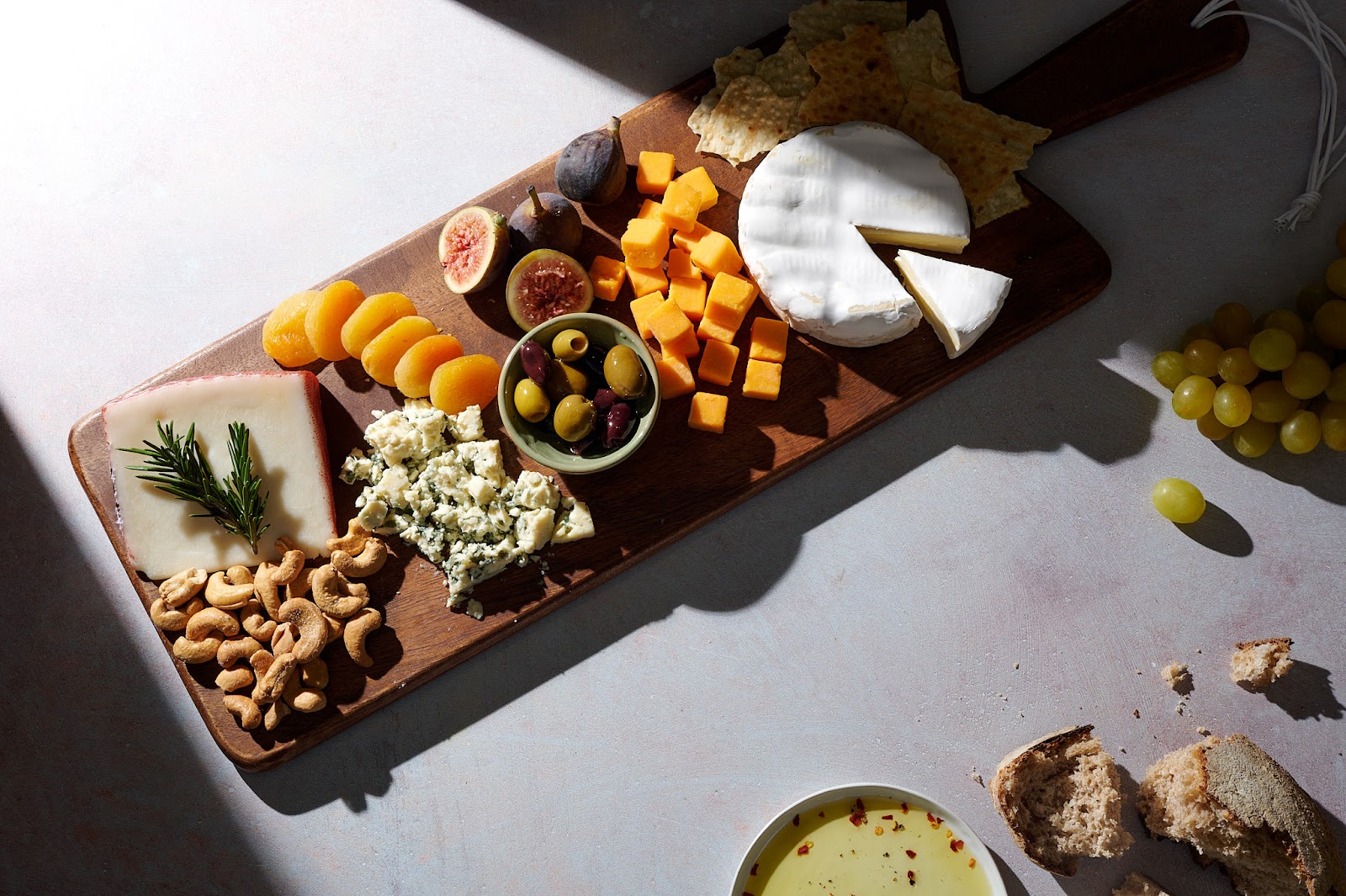 The Optical Snoot, One of Hudi’s Favorite Tools in the Studio

One of Hudi’s favorite tools in the studio “to get something dramatic quickly” is the optical snoot. The optical snoot is a device that mounts straight onto your light. It includes a lens at the front to focus and defocus the light as well as a lever to change the size of the light beam (much like controlling aperture on a lens). 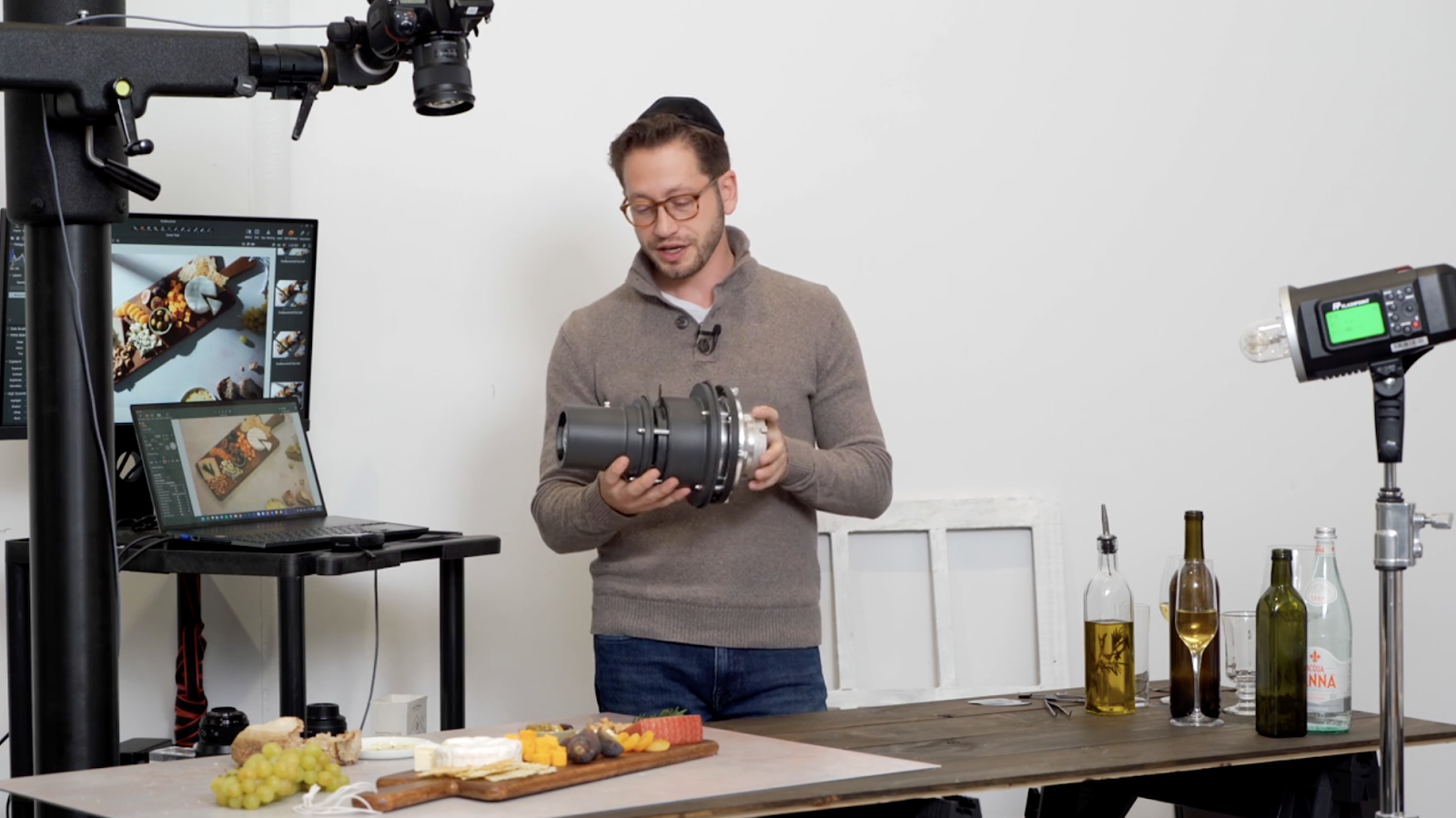 While you can use the optical snoot on it’s own as a spotlight, the part that makes an optical snoot really fun is the ability to use little metal gobos that look like stencils with various designs cut out of them. These circular metal gobos are placed in a slot within the optical snoot, between the focusing lens and the light source. The pattern on the gobos is the pattern you’ll see projected onto your subject. The gobos seen here are cut to look like a window frame, a window shade, and window blinds.

“What we normally do is we just turn the lights off in the studio, get the modeling light on, and just sit there positioning the light until we find just the right spot.” Hudi explained.

After finding the sweet spot for the optical snoot, a second light with a softbox is set up on low power, for a bit of fill light. “This is at 1/64…so just giving us a touch of light” to fill in the shadows. Here’s the cheeseboard shot with an optical snoot fitted with a “window pane” gobo. 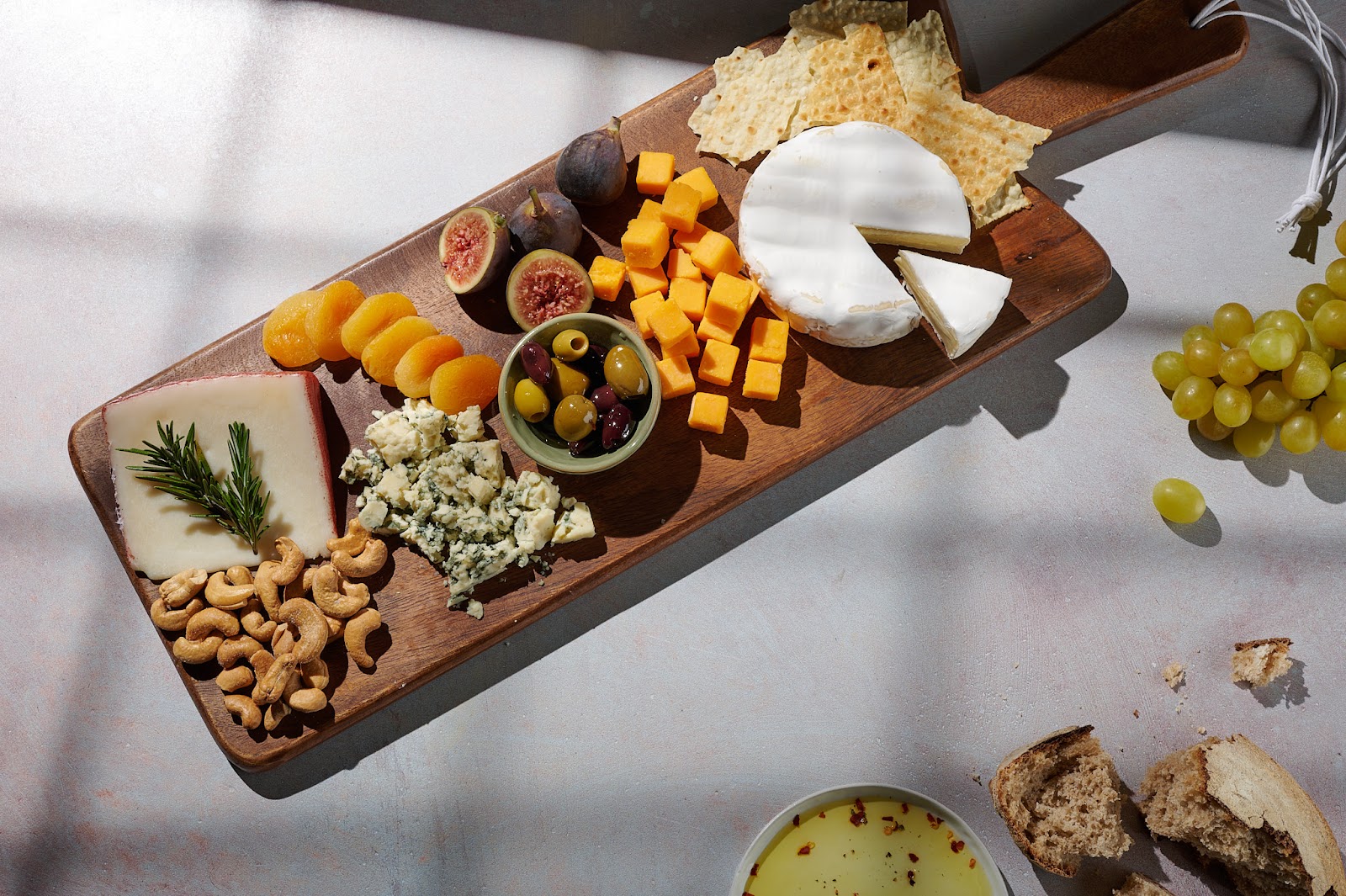 And here’s an example of the scene with the window pane gobo more clearly focused via the lens on the front of the optical snoot with no fill light. 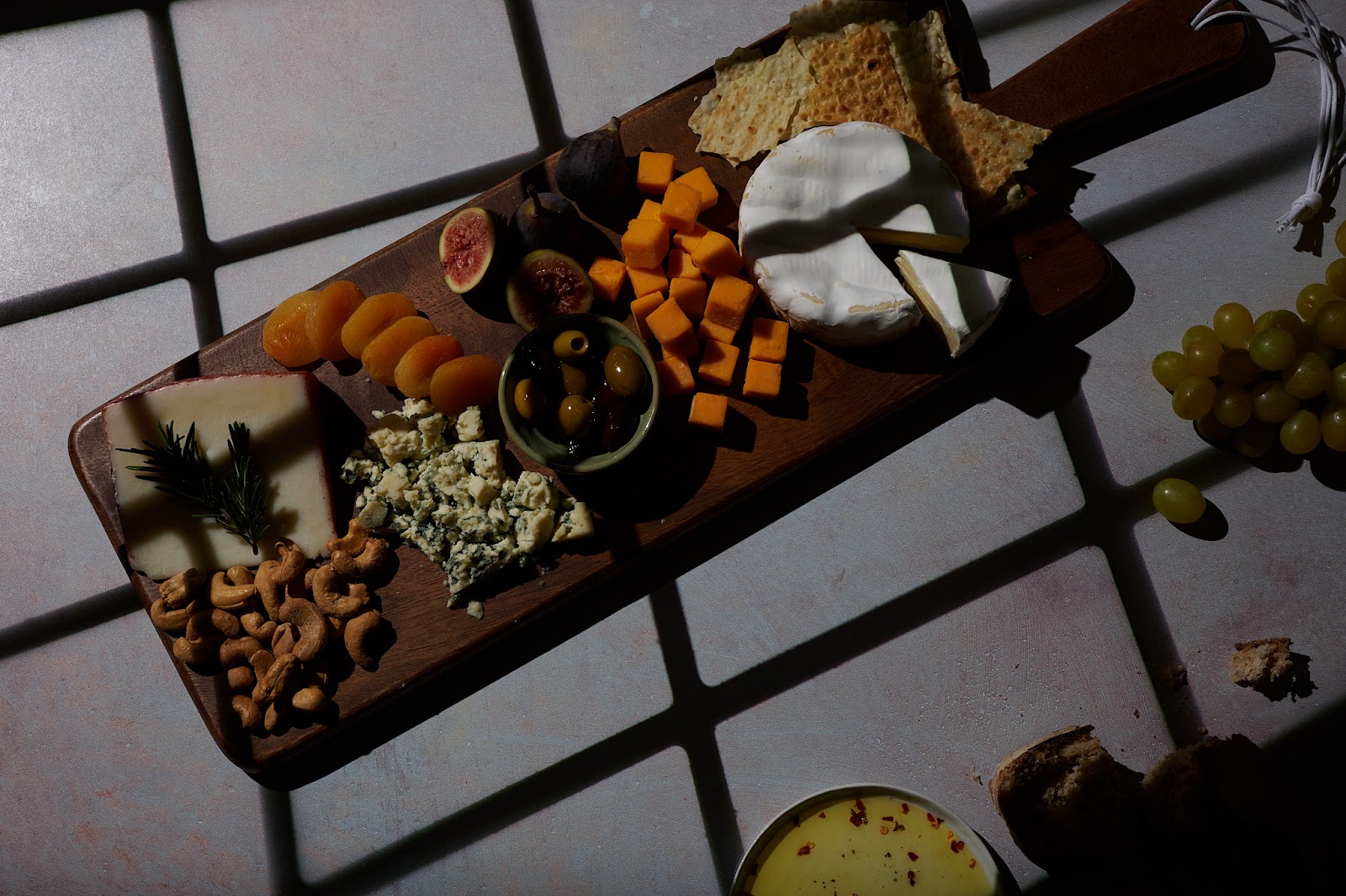 The creativity and options available with an optical snoot are endless. It’s no surprise that it’s one of Hudi’s favorite tools to use in the studio.

To up your food photography, as well as portrait photography, consider getting your hands on an optical snoot. It would be much more time consuming, difficult, or even impossible to achieve certain shadow patterns and lighting designs without one.

If you’re in a position where you can’t get an optical snoot or it doesn’t make sense to own one at this time, know that there are still plenty of ways to create your own gobos. It just needs to be something that sits between your subject and your light source. Even a window frame from a craft store can work as a gobo. Be creative and study the objects around you. You might just find your next perfect gobo hiding in plain sight.

Be Creative, Have Fun, Try Things Out

Hudi says it best: “We love when the technical influences the creative. I love that, that you can figure out from a technical standpoint how to make something creative and beautiful.”

So, in the midst of your crazy schedule, between all the photoshoots, appointments, and to-dos, it’s good and healthy to stop and have a little fun. Playfulness actually increases your productivity and creativity—two things you need on your side as a photographer. There’s evidence that taking the time to play (however that may look to you) hugely benefits your mental and physical health.

So be creative, have fun, play with some gobos, and see for yourself how shadow patterns and lighting designs can take your photographs to a level beyond what you’re doing now.