In the world of photography, you’ll find gear junkies with cases and shelves full of equipment…and you’ll find minimalists, photographers who shoot with lightly packed camera bags—if they even bring a bag.

A fashion editorial photoshoot sounds like a high-end affair, especially on location. And while photoshoots are usually complex on many levels, the photo gear doesn’t have to be.

Let’s step outside with fashion photographer Dani Diamond, as he goes on location to the grounds of a beautiful New Jersey home. Watch and learn as he teaches us how to shoot a fashion editorial with minimal gear.

Well alrighty then. Teach us your magical ways, Dani.

We start off with model, Yuliya, on a long, cobblestone driveway using just one Sony A1 and two lenses. A 35mm and an 85mm, both f/1.4, the 35mm will be used for “some exaggerated angles and poses” and then “that bokeh-licious 85,” Said Dani. The driveway provided leading lines to the model and gorgeous architectural details in the background.

“We picked some really dope outfits…We’re just going to be concentrating on just killer poses, angles, and expressions,” Dani said.

Herein lies the benefit of becoming a photography equipment minimalist: razor sharp focus. And we’re not talking about lens quality here. We’re talking about mental focus. Less photo gear means better mental focus. When you’re not fiddling with c-stands and power packs, you can focus solely on interacting with your model and creating killer editorial images. Working With A Professional Model on Set

If you’re just starting out in fashion photography, one bit of advice to keep in mind is that it pays to have a pro-level model on set. There’s a big difference between someone who knows how to pose and someone who doesn’t. A professional model understands how to move and when to move, with virtually no coaxing from the photographer. Find a pro model and make your life easier on set. Your fashion photography will manifest itself more quickly when you can focus on shooting instead of coaching the model.

When it comes to his model, Yuliya, Dani says, “I don’t even have to tell her anything. She’s a magician, she just reads my mind. She knows what to do with the poses.”

Effortless. Do what you can to make your shoots as effortless as possible without sacrificing quality.

Tips for Posing Your Model When Shooting With the Sony A1 and 35mm F/1.4

When “you’re shooting wide and you’re not using reflectors, the biggest issue I always have is that if their chin is down the lighting has lots of shadow on the face and it’s not so flattering,” said Dani.

Because the shoot is outdoors and the light source is from above, “the best way to counter that is to have them just lift their chin,” Dani explained before giving us another tip on an easy way to help people pose: tell them where to place their chin. “It’s the easiest way to pivot the head in any direction you want.”

Under Dani’s direction, “just lift your chin toward the sky,” Yuliya demonstrated how a small adjustment in the placement of her chin resulted in “killer, directional, soft light” on her face. Model tilting chin up towards sky/light​​

Switching to his Sigma 85mm f/1.4 lens, Dani showed us how to craft images where the subject is in motion, walking away from the camera and turning.

To help your creative vision pan out, Dani gives another tip for directing your models: physically show them how you want them to move.

“A lot of times when I tell a model to do this,” Dani explained, “they don’t fully understand so the best way for me to do it is to just show them exactly what I mean.”

“I’m shooting super wide so the background is completely melted out, but I always nail the shots where the focus is on point with the face.” The answer to nailing the focus every time? “Just buy Sony!” he laughs, before giving us an eyeful of his Sony A1 and Sigma 85mm.

Shooting the Sony Alpha 1 on continuous autofocus gave Dani yet another effortless way to create editorial-worthy fashion photography with minimal gear and minimal stress. The Sony A1 tracked Yuliya’s movements with precision as she turned full circles and walked away from the camera. While Yuliya changed for an upcoming editorial look, model Esmeralda joined Dani for the second look wearing a nude-toned dress and a long, flowy, multi-patterned, kimono cardigan to add color and movement.

Rather than becoming a large production on set with a truckload of gear, Dani reminds us “it’s all about the wardrobe and it’s about the poses and the expressions.” After taking a few shots with the 85mm on the cobblestone driveway, Dani switched to the 35mm lens in order to fully capture the movement of the colorful cardigan.

“I really like the overcoat/dress that we have going on here. I want a lot of movement. I wanna really capture that movement. We’re gonna get some where she’s throwing her [cardigan] out at me so we could just capture that motion.” With a big grin on his face, Dani revealed, “whenever I’m stuck, I ask the model what she thinks! Esmeralda, you come up with the next idea for us. You get to choose a location. So look around, find something.”

And find something she did. Pointing to a nearby lamp, Esmeralda and Dani set up for their next shot, grabbing several skillful images with Esmeralda seated at the base of the lamp.

That’s the beauty of creativity mixed with collaboration. Dani does a masterful job of showing us how to include and collaborate with the team around us. After his photoshoot with Esmeralda, Yuliya returned to the set, this time sitting fountainside in an elegant dress. 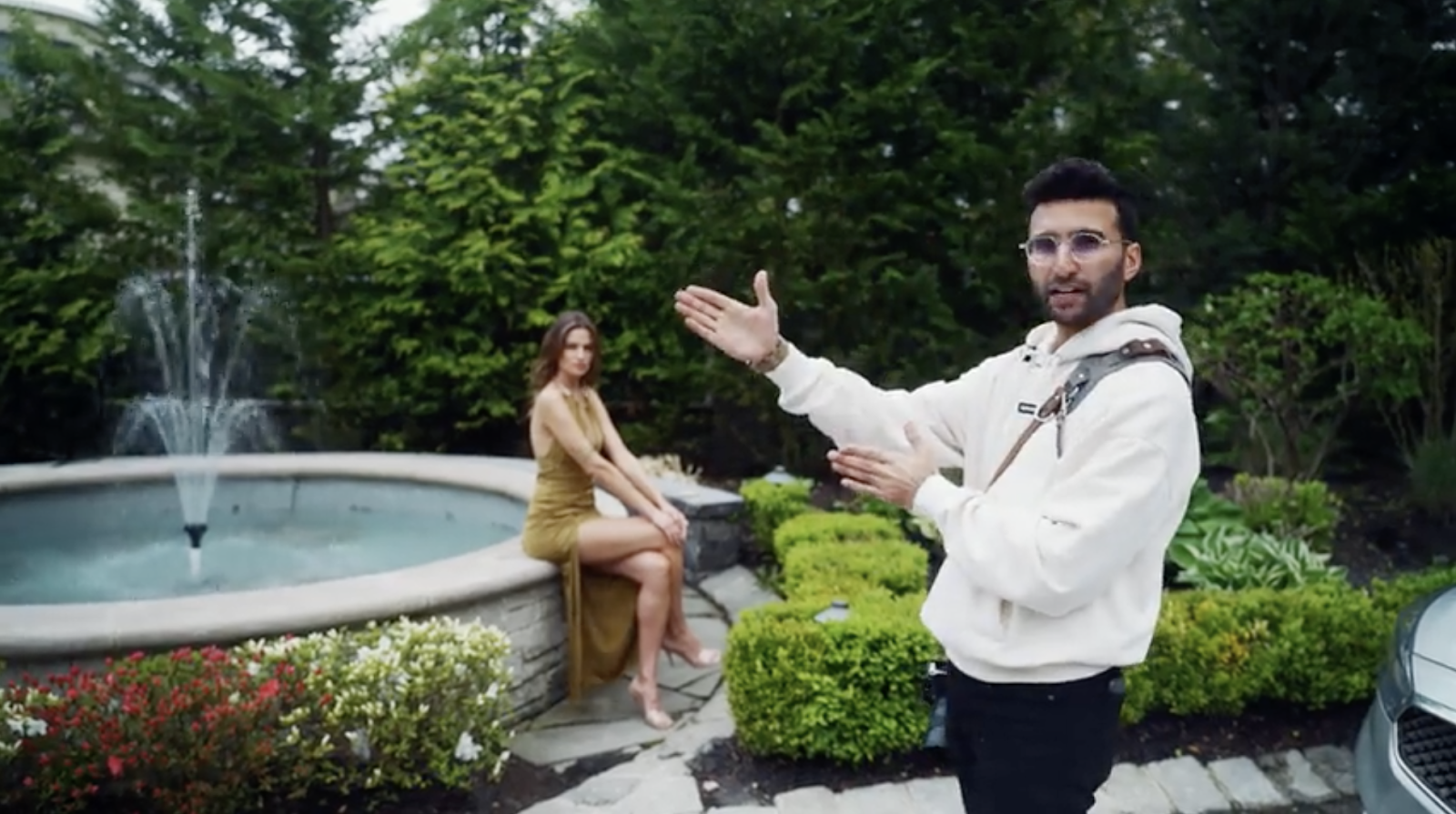 After testing three different locations around the fountain, each one had its own set of problems:

“So my last resort in moments like this, instead of shooting at eye level is to shoot downwards. So it’s just about our subject, what she’s sitting on, and a fountain behind her. Kinda create that blue fountain as our background,” Dani explained.

Using his Sony A1 and 35mm f/1.4 lens, Dani decided “that’s the angle I’m gonna go with.” However, even this angle presented a challenge with a water hose in the background. To blur out the hose, Dani shot pretty wide open (low f-stop number). For the final set of editorial images with Yuliya, Dani wanted a “completely different look…a different angle…just to add to the story.” He adds that although the first two editorial looks were strong, he “didn’t want them to get too repetitive.”

So he looked around for a way to change things up. And if that means climbing atop a tall, thin ledge next to the trash cans, so be it. Do whatcha gotta do to get the shot. 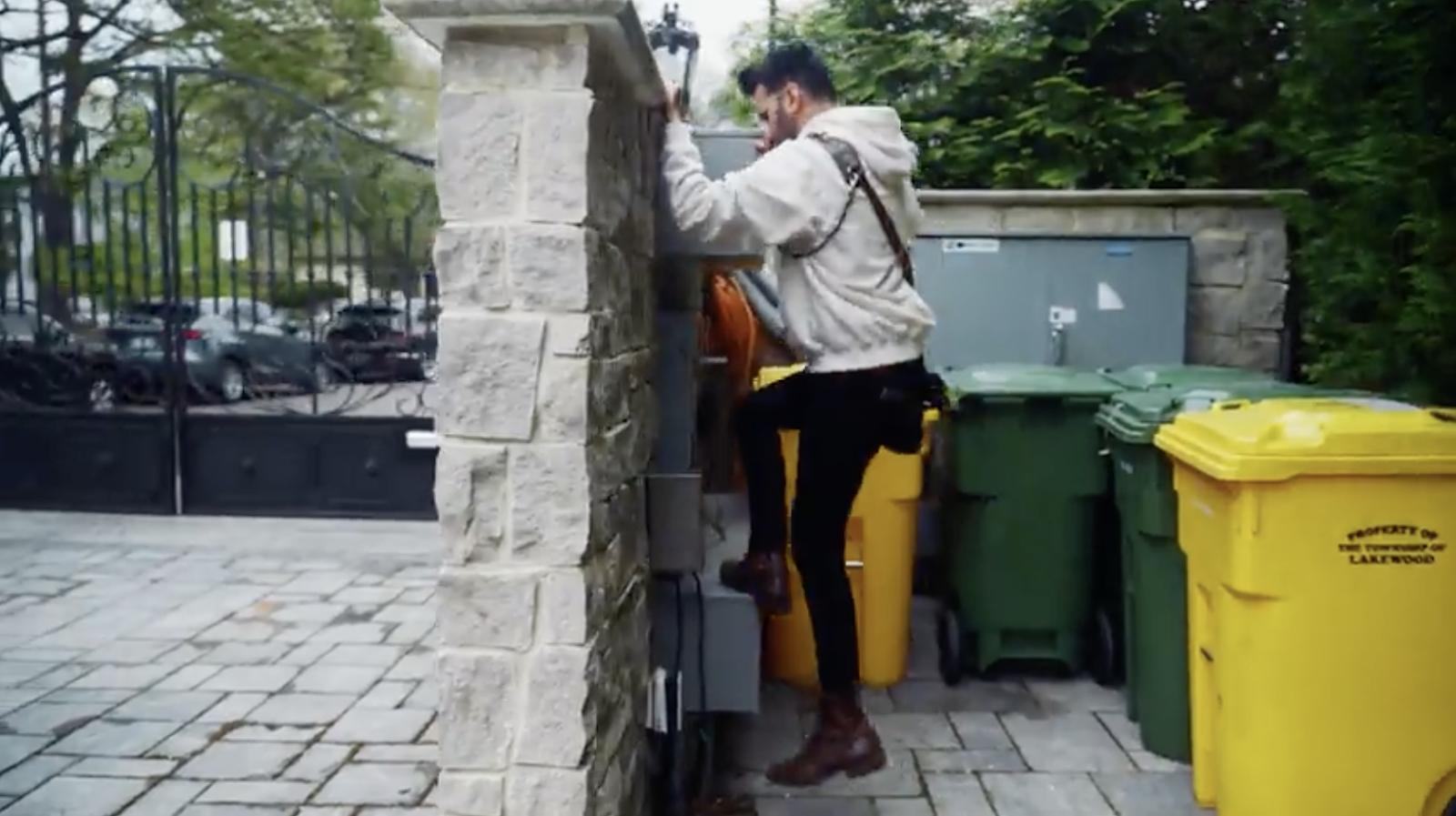 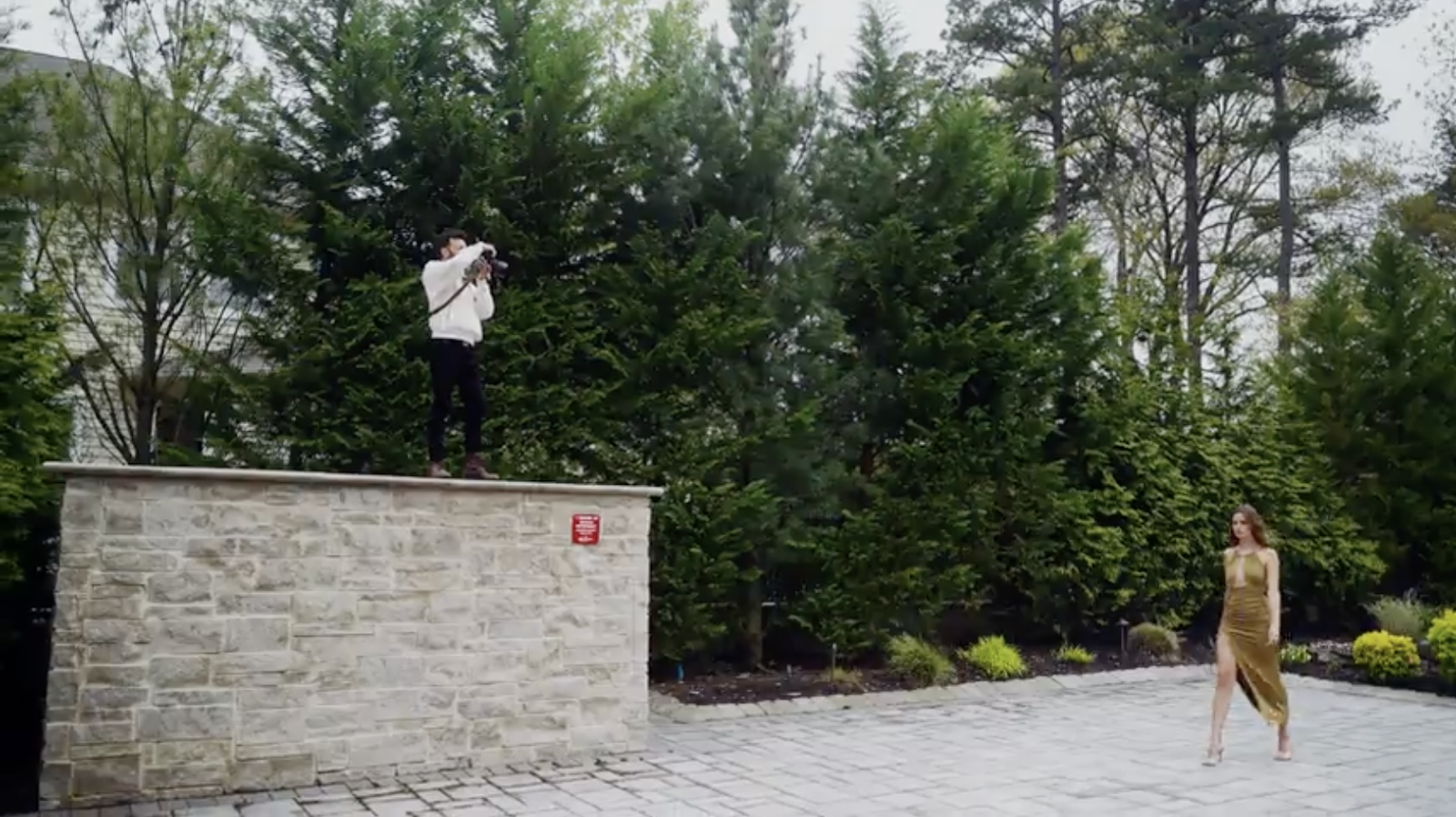 The 35mm wouldn’t have been tight enough to get the shot, “I just want pavement and her. And that’s it.”

So with the 85mm on, Dani got just what he wanted from his high vantage point. “I shot with the 85. I couldn’t do it with any other lens. Any other lens would be too wide.”

Dani recommends to “find a high angle and just shoot downwards. You just get such a unique perspective that’s just different and really helps with the story.” As a photographer, knowing how to shoot a fashion editorial outside with minimal gear exercises your problem solving skills. And remember that keeping your gear minimal and uncomplicated increases your focus for other things, like refining your eye and connecting with your subjects. Learning how to do more with less actually makes you a more versatile photographer, as ironic as that may sound.

It’s always a good time with Dani. Thanks for teaching us how to shoot beautiful portraits with minimal gear. You legitimately created magic with no other photo gear but a camera and two lenses.

What about you? Are you a photography gear minimalist? Is less more? Or is more…more? Tell us in the comments what kind of photographer you are.

But for those interested, here’s a - super short - list of photography gear used during Dani’s fashion editorial shoot with Yuliya and Esmeralda.

The Manuel: Controlling Light on a Beautiful Beach Island